WEC apprentice ranked in top 10 welders in the world

WEC apprentice ranked in top 10 welders in the world

Tyler Atkinson, the “Welding Superstar” from Darwen-based metal fabrication company WEC Group Ltd, has now landed back in the UK heaped with praises and full of national pride, after representing his country in an intense 4 day “Skills Olympics” competition in Russia.

Tyler, only 19, has now officially earned his rank as one of the top 10 welders in the World Olympics’ held in August in Kazan.

Battling it out with other apprentices from all over the World, in a 4 day “weld off”, Tyler did extremely well, narrowly missing out on a podium position in a competition heavily dominated by China, South Korea, and host nation Russia. 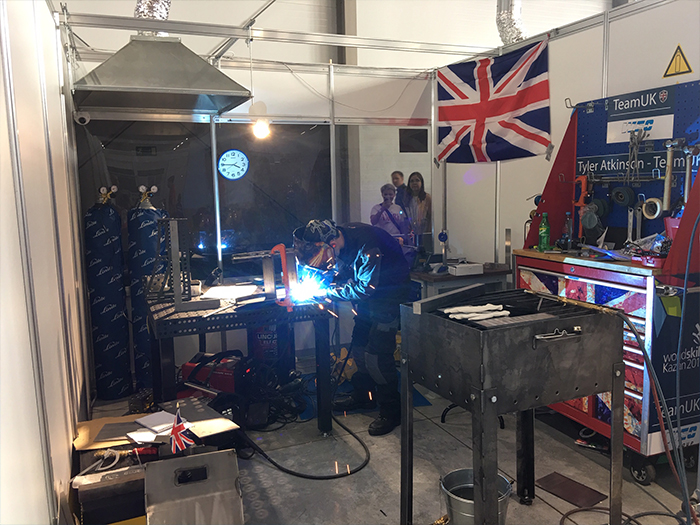 The WorldSkills category of Construction Metalwork includes fabricating, assembling and joining large and small metallic structures. This years’ challenge was fabricating a miniature tank replica to exacting standards and Tyler shone all the way through in the competition, doing his country and fellow Team UK members proud

Andy Whitehouse, the WorldSkills UK Construction Metalwork expert who coached Tyler over the past two years said: “I am extremely proud of Tyler for giving his best in an extremely tough competition against established countries with vast amounts of experience and resources.

To represent your country is a significant honour and Tyler did this with energy and determination. He gave his all for himself, his family and his employer, he also carried the hopes and dreams of all of the apprentices who entered the UK construction metal competition..... A true champion.”

Kris Mercer, WEC Group Training and Development Manager and Master Welding Instructor commented: “We are extremely proud of what Tyler has accomplished at an international level. He’s done amazingly well in the competition and this is a huge achievement for him. It’s a testament tribute to the investment by WEC Group in our apprenticeships and training frameworks, as well as the effort put in by Tyler himself.”

Simon Jordan, Director of Themis at Burnley College, Tyler’s Apprenticeship Training Provider, said: “Many congratulations to Tyler on his outstanding performance in Kazan in WorldSkills 2019. He has represented his country with honour and shown the attributes which make him an exemplary Themis Apprentice: commitment, innovation and determination. “He is truly an inspiration to all Themis Apprentices. His achievement reflects the high calibre of knowledge and skills that Apprentices develop when industry-expert Themis Trainers work in partnership with leading Employers such as WEC Group, who are committed to developing the workforce of the future.”

It’s been a challenging two year journey for Tyler to get this far. As a welding/fabrication apprentice aged 19 from Blackburn, Tyler was first identified for Team UK selection following his success at the regional and national WorldSkills UK competitions in 2017, where he was able to secure a silver medal in the UK Construction Metal Work event, narrowly missing out on the top spot of the podium to one of his fellow older WEC Group apprentices.

Tyler had also attended the competition the previous year and returned with a highly commended score, showing great consistency and perseverance in his hard work. Since first entering the competition 4 years ago, WEC Group Ltd has had an impressive track record of getting its students through to the national finals and apprentices from the company have already won 7 medals including 3 golds.

Since his Silver medal win two years ago in the national heats of the event, Tyler has been attending various bootcamp sessions, events and competitions as well as Master Classes at the WEC Group Training Academy in order to fight for his place in the final Team UK and go on to compete globally in Kazan. His latest final assessment saw him making sparks fly in a head to head competition with a talented Finnish medal winner at Dudley College, West Midlands.

Dr Neil Bentley-Gockmann OBE, CEO of WorldSkills UK commented: “This is a fantastic result for the team and the UK as a whole – I couldn’t be prouder. This was the ultimate test and they all stepped up to the mark. The members of Team UK, all under 25 years, championed the UK focus on skills development in front of a global audience, sending a strong message that the UK is a world-class place to invest, do business and create jobs. Governments, education and industry need to continue to work with us to help make sure the UK stays at the cutting edge of global best practice in skills development.”

Tyler is now looking forward to his future at WEC Group, having progressed to become Welding Co-ordinator within the company, and will be working with the apprentices who are competing in WorldSkills UK later this year.