WEC Group Training Academy, which offers five year apprenticeships in engineering, fabrication and welding to youngsters in Darwen and Blackburn, has been chosen as the winner of The BAE Systems Award for Large Employer of the Year in the Liverpool, Cumbria and Lancashire region finals.

The Apprenticeship employer entries judged to be the very best of the best will have the additional honour of featuring in the acclaimed Top 100 Apprenticeship Employers list, which will be produced by the National Apprenticeship Service in partnership with City & Guilds.

The Top 100 Apprenticeship Employers and the national award winners will be revealed during a ceremony at the LG Arena in Birmingham on November 13.

The company picked up its regional award at an event held at Liverpool Town Hall. Kris Mercer, Welding and Engineering Instructor at WEC Group, said: "This award is something we are very proud of.

"We launched the training academy in 2006 to meet the skills shortage in high-end fabrication.

"Today, ten percent of our workforce are apprentices and our turnover has nearly trebled since the Apprenticeship programme began." 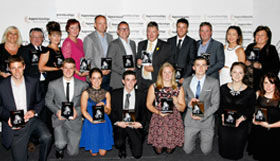 The National Apprenticeship Awards celebrate employers who can showcase their commitment, contribution and the success that apprenticeships have brought to their organisation.

The WEC Group is one of the North West's most prominent engineering businesses. Privately owned, it has a turnover of more than £35 million and more than 425 staff across all 12 divisions. It is also the largest subcontract engineering company in the region.

The company launched the training academy when it realised it could not grow as quickly as it wanted to because it could not find welders skilled to the level required. The majority of its apprentices are welding apprentices and they now make up 28 per cent of the group's welding workforce.

The academy, which is the brainchild of Managing Director Steve Hartley, has put together a programme to train people to the high standard required by WEC Group as it continues its growth and development.

The programme consists of a five-year apprenticeship, which includes time at the training academy, three years at college on day release and work carried out on the shop floor.

Steve Hartley, managing director of the WEC Group, said: "It's a massive achievement for us to win this award and we are delighted.

"We put a huge amount of effort and money into ensuring our young people get the best training we can give them. It sets them up for a rewarding career in the engineering industry.

"The award is down to the hard work of Kris Mercer, who heads up WEC's training academy, and all the staff who contribute to making it a success year after year.

"We are proud of our young people who themselves put in a lot of hard work to complete their training and education.

"The academy is expanding, providing training in other parts of the business including machining and technical support. The plan is to eventually double the intake to more than 20 apprentices per year. It is something we are really committed to as a group."

The WEC Group's apprenticeship programme allows trainees to work on community projects, such as the manufacture and installation of a new dome for the Darwen Jubilee Tower.

Another high profile project was the fabrication of a stainless steel Spitfire Memorial Sculpture for Darwen town centre, the group's home town.

These projects give apprentices the chance to work with local groups whilst developing their skill sets. They also act as ambassadors for the group and the apprenticeship scheme visiting schools. 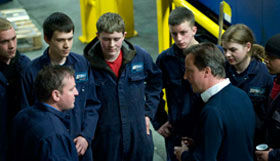 WEC Group's training academy has received praise from Prime Minister David Cameron and Business Secretary Vince Cable, both of whom have visited.

The Prime Minister praised the scheme and WEC Group's commitment to providing facilities and training, especially in difficult economic times.

The WEC Group has also hosted several fact-finding visits from other manufacturing groups looking to emulate our industry-leading training programme.

Claire Blott, Interim Deputy Director Employer & Delivery Services in the North West, Skills Funding Agency, said: "The National Apprenticeship Awards are an excellent platform to recognise and celebrate the dedication shown by all our excellent Apprenticeship employers and apprentices.

"The quality of entries we have had for the Liverpool City Region, Cumbria and Lancashire awards this year has been exceptional." 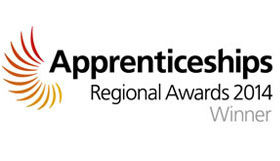