Metal manufacturing specialist MTL Advanced is showing strong signs of recovery three months after a partnership deal with WEC Group that brought the company out of administration.

WEC Group funded the deal to acquire the business and certain assets of the South Yorkshire firm earlier this year, saving 135 jobs.

MTL has now traded profitably in each of the three months following that deal, compared to month on month losses in the previous 12 months. The company has also won back a £3 million defence contract which it lost when it went into administration in February.

A major £1 million programme of investment in new equipment for MTL's Rotherham facility is also about to get underway. WEC has announced that it is creating an apprenticeship scheme at the company which will mirror its award-winning training academy, which was last year ranked in the top three large UK apprenticeship providers.

He said: "We have really hit the ground running, and as a result we have seen some positive and encouraging results. 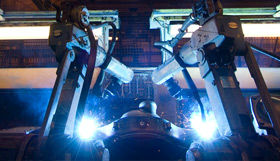 "MTL Advanced is continuing to move forward in the right direction, thanks to the hard work and commitment of all the team there.

"We were delighted to win back the major order that had gone away following administration and the investment programme we have announced will make MTL an even stronger operation."

WEC will be actively promoting the services of MTL at a series of trade shows in sectors including recycling, defence and offshore.

Wayne added: "The new apprenticeship scheme will see MTL Advanced train and develop young skilled workers in the South Yorkshire area, giving them the tools they need to help us drive the business forward. It is a real investment in the future and we're currently looking for our first intake of six apprentices.

"The £1 million investment programme will see the installation of a new large bed laser cutting machine and a wet painting line at the Rotherham factory to enhance the services that MTL can deliver.

"And we're also looking to recruit in certain areas as we work in partnership with MTL on its continued development. It's all very positive for the future."

The partnership deal was completed in just three weeks and has created one of the largest laser cutting operations in the UK's fabrication and engineering sector.

Karl Stewart, sales director of MTL Advanced, is excited for the future and the opportunities that now exist for the 300,000 sq ft capacity in Rotherham and its workforce.

He said: "The order book of MTL is much better than planned and this has resulted in recruiting nine new employees over the last three months.

"The synergy with WEC Group is already proving to be very strong. The deal has enhanced our capabilities and capacity and that is a major advantage to all our customers.

WEC Group has forecast a turnover of up to £60 million this year. To discuss your requirements, please contact us on: